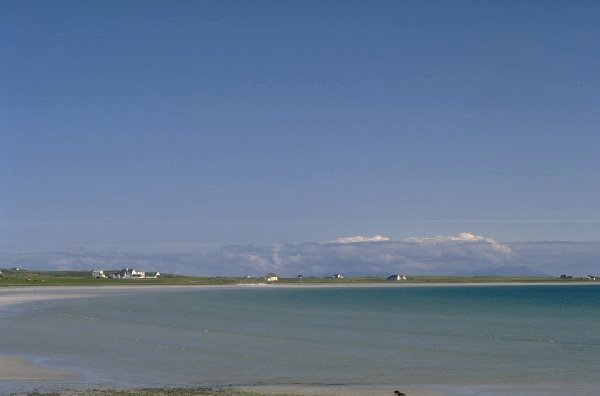 This is Gott Bay on the Island of Tiree, the outermost of the Inner Hebrides, Scotland.

The next few pages exist for the benefit of those interested in visiting this gem of an island. I have been holidaying there every year since 1984 primarily for the excellent windsurfing conditions, but there are plenty of other good reasons for going there.

Tiree is variously referred to as The Land below the Waves, The Land of Corn or The Hawaii of the North depending on who you speak to. Each of these descriptions holds true depending on the season - and sometimes the time of day! Tiree is probably the flattest of all the Hebrides, most of the island lying no more than 15m above sea level. However there are three hills which give superb views over the 30 square-mile island and much further afield of course. The highest of these hills, Beinn Hynish (141m) is dominated by The Golf Ball, a huge radar dome used by the CAA for tracking transatlantic air traffic. The Golf Ball is visible from almost everywhere on the island and is the first thing to appear over the horizon as you approach on the Caledonian MacBrayne ferry from Oban

Tiree's finest feature is its beaches. There are over a dozen white sand beaches around the circumference of the island ranging in size from 10m or so, to the 4km long horseshoe of Gott Bay. The island has a predominant machair covering - a finely cropped grass which turns into a thick carpet of flowers in the spring.

The flatness of the island gives a virtually unhindered view of the sky from horizon to horizon which is one reason why Tiree is famous for its high number of sunshine hours. Sitting in the Gulf Stream, the sea never gets particularly cold and climate is relatively temperate. One aspect of Tiree's fame derives from its 4-times daily entry in the Shipping Forecast.